As in 2003, the Great Lake Basin around Khovd, Western Mongolia, was visited.

The time of the trip – late in the season – was chosen with the aim to collect and document late-flowering species especially of the Chenopodiaceae (goosefoot family) and the genus Artemisia (sages). During a 12 day field trip about 300 species of vascular plants were documented with approx. 350 herbarium collections (K.-F. Günther, Herbarium Haussknecht, Jena and M. Schnittler). Especially for sages, the growth form was carefully documented, since this character allows to distinguish three well-separated groups in that genus: annual species, and perennial ones with and without the capability to form root suckers. Additionally, out of more than 5000 shots about 2000 digital images of the plants in living condition were selected (M. Schnittler). More than 15 species of Artemisia, and about 20 species of Chenopodiaceae belonging to 11 genera were found and described in several life stages from seedlings over vegetative to adult plants. Especially for Chenopodiaceae, flowers and seeds/fruits in different stages, from growing to mature, were documented to allow a safe recognition of sterile or flowering plants which cannot be determined using the keys in traditional determination books that focus usually on seed/fruit morphology.

For help with organizing this trip we are indepted to our Mongolian partners from Khovd University, especially Dr. Oyuun Damdinsurengiyn. We also owe thanks to the team of the joint Russian-Mongolian Expeditions, headed by Prof. Dr. Peter D. Gunin, for its generous hospitality in Ulaanbaatar. Most of the collecting for this trip was carried out by Dr. K.-F. Günther, Herbarium Haussknecht, Friedrich-Schiller University Jena, who agreed as well to assist with the subsequent determination work for the collections.

Impressions of a field trip to Western Mongolia. 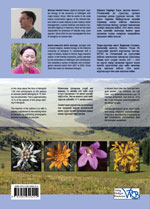 In summer 2003, Dr. Sabrina Rilke and Sebastian Schmidt led a four weeks students excursion in Mongolia. Starting from Ulaanbaatar, they explored the country westwars towards Khovd/Great Lake Basin. On their way back, they touched the north of the Gobi and returned to the mongolian capital after exciting weeks with lots of plant material and also new ideas in mind.

In summer 2003, Dr. Sabrina Rilke and Sebastian Schmidt led a four weeks students excursion in Mongolia. Starting from Ulaanbaatar, they explored the country westwars towards Khovd/Great Lake Basin. On their way back, they touched the north of the Gobi and returned to the mongolian capital after exciting weeks with lots of plant material and also new ideas in mind.

Region visited:
From Ulaanbaatar to the Great Lake Basin in Western Mongolia around Khovd and back to Ulaanbaatar on the southern route through desert and steppe habitats – typical for Central Asia.

Our excursion became possible through the preparation and organisational management by Sebastian Schmidt. Its goal was research on assemblage of species and natural resources in the visited vegetation zones with special focus on the endangerment of natural resources.

We travelled about 3.500 km on sand roads along the main routes from Ulaanbaatar through the Khangay mountains and the Great Lakes Basin to Khovd and from there along the Mongol Altay across the Gobi Altay back to Ulaanbaatar. We had the chance to see forests, steppe and semi-desert areas from different elevation levels. We owe this to our three helpful drivers who always provided for our needs very well and drove all the routes as requested. In particular sites the local flora, its zonal characteristics and if possible also the soil were examined. At the same time some participants watched the local birds.
From Ulaanbaatar to Khovd Prof. U. Schickhoff enriched the excursion with his knowledge. With his help we got an introduction to the Mongolian flora which was still unknown to us at first. The University of Greifswald’s “research station” in Khovd was the destination of our journey. There we helped with the research on grazing ecology. To get an inside view of the work there and to support the research project on two sites the group split up for three days on this westernmost point of our trip.

One group helped Anne Zemmrich with the research for her dissertation about the influence of grazing on semi-desert ecosystems. Prof. M. Schnittler supported this group since he also worked on the similar topic of age cohorts of semi-desert plants as indicator for the degree of grazing.

The other group worked with Prof. U. Schickhoff on a transect in the mountain steppe near Dund-Us in the Khovd Sum, in the northwest of Khovd, to assist Gerrit Werhahn and Catharina Knopf from Rostock with their diploma topic.

The summer of 2003 was a time with very high amounts of rainfall measured by Mongolian standard. That was why we saw the typical blue Mongol sky less than usual and many times experienced showers of rain. On the other hand we got to see many annuals and relatively green landscapes all the way into the semi-desert zone. We even examined the shrub-like Saxaul (desert-tree in the Gobi desert) on the northernmost borders of its area of distribution with raincoats on and wet fingers. For comparison see the data from Khovd: average annual precipitation = 128 mm, annual precipitation in 2003 = 223 mm (climatological station Khovd 1983-2003).

During the excursion the participants kept a protocol on the base of HILBIG (1990) and HILBIG (1995). They can be found in ZEMMRICH et al. (2009). The identification of the plant species was done with GRUBOV (2001) right there in the field or because of the lack of time also en route in the car. Herbarium samples were collected of as many as possible species in doubt. In Khovd Dr. Oyuunchimeg Damdinsürengiyn analysed a large part of the already collected samples and confirmed or revised them. We thank her a lot for the great help. The labelled records were determined or verified in small groups back at the Institute of Botany and Landscape Ecology of Greifswald University during the winter-term 2003/04. The record numbers from the Greifswald Herbarium (GFW) are cited in the species list, also important synonyms are named there. Taking the closely related species into account, the records were finally determined till 2010 within the scope of the project „FloraGREIF, the virtual flora of Mongolia“ which was initiated in Greifswald in 2007 and is financed by the German Research Foundation (DFG). To state the degree of vegetational land cover in the vegetation assessments we used the Braun-Blanquet scale in nine parts.

The soil was examined in twelve locations. Katja Köppen standardized all the data, Andrea Strauss and Sebastian Schmidt matched the soil types with the FAO nomenclature and added the information to the daily journals.

Zoological observations aimed at avifauna and ants. To support the ornithologists Hartmut Kretschmer accompanied the group on their way to Khovd. The lists of sighted birds in the journals are based on his notes. A list summarizing all birds was compiled by Martin Schuhmann. Following this, there are first results from the evaluation and interpretation of the ant collection.

Apart from this report about 700 herbarium specimen, kept in the herbarium of the Institute of Botany and Landscape Ecology (University Greifswald) (GFW) and several private herbariums (Rilke, Köppen, Schnittler), a sizeable ant collection and more than 120 specimen in silica gel for molecular biologic research are the results of the excursion.

Infrastructure:
The trip was organised as student-excursion of the Institute of Botany and Landscape Ecology of the University of Greifswald guided by Sabrina Rilke and Sebastian Schmidt.

Impressions of a field trip to Western Mongolia.

About 70 localities of various types of stony to slightly sandy deserts situated around the lake Khar Us Nuur. Furthermore, 20 localities in the Zhargalant Mts., an isolated mountain massive reaching up to 3600 m southeasterly located of lake Khar-Us-Nuur.

The trip was funded in part by the project Changing Pastoral Ecosystems in Western Mongolia of the Institute of Botany and Landscape Ecology of the University of Greifswald on questions of grazing impacts and sustainable use of vegetation in the region between Mongolian Altai and the Great Lake Basin of Western Mongolia funded by VolkswagenStiftung (I/77 426). The project runs in co-operation with the Institute of Geography of University of Hamburg and State University of Khovd.

Impressions of a field trip to Western Mongolia: selected photos of plants and their habitat.

Impressions of a field trip to Western Mongolia. Selected photos of animals and their habitat.